Its been a while since I’ve done a tag. I normally reserve it for occasions when I dont have anything interesting to share otherwise. And this is one such occasion :).

Amrita has tagged me to share a few tidbits about my life. So here’s how it goes…

1. Indebted to someone for life:

Jayanti, without a doubt. Many of you know who she is. In fact I’ve even written a letter telling her how indebted I’m to her. She has been with my parents for close to 4 years. She is not just a care-taker or a helper to them, but a daughter in many ways. Someone who is very sensitive to their needs, who knows what their likes and dislikes are, who looks after them like her own parents.

Everytime I leave Delhi with a heavy heart, my only concern is Achan & Amma’s welfare. But its her ever-smiling face that gives me an assurance that I’ve nothing to worry.

No amount of thank you’s will be enough for what she has been to me and my family. I’m eternally grateful to her for being there for us.

And today and everyday I pray to God that she is blessed with all the happiness in the world that she so rightfully deserves.

2. A gesture that left me speechless

This was in August 2007. We lived in Muscat. R was away on a business trip. Namnam was suffering from fever. Although she had a history of febrile convulsion, it had been a while since it had relapsed as we had been able to regulate the temperature whenever she had fever. So it never struck me that she could have her bouts again.

I still don’t know what went wrong that day, but she had her convulsions again. It was late evening. I didn’t know what to do. I didn’t know how to drive, who to call for help as some of our friends were either out-of-town or lived away. I was as helpless as could be. I took her in my arms, ran to the next door and rang the bell. I couldn’t even wait for the person to answer the door. I rushed to our landlords’ house who lived in the ground floor.

To tell you a bit about out landlords, they were not a very favorable bunch of people to be around. They were a rude lot who had had at least one altercation with whoever came in contact with them. They were very difficult people to handle. Our friends from Muscat would vouch for that.

But your landlords’ behavioral problem is the last thing to cross your mind when your child is convulsing in your arms.

Anyway, when I went down for help, what I got to see was not the rude, brash side of my landlord, but a noble and kindhearted one. When he saw Namnam’s condition, he immediately called for his driver(who, thankfully stayed in the same house), and asked him to take us to the hospital. He even told him to wait in the hospital so he could bring us back home once she was treated.

That one gesture has stayed with me ever since. Thats when I realized the true worth of having good neighbors. They were truly God-sent for me.

To all my friends from whom I’ve drifted apart for whatever reasons- be it my childhood friends, friends I made in school, college and at work, those I made in Muscat and Doha, all of them. I want to say sorry to even those virtual friends who I ‘met’ through the beautiful medium of blogging, but with whom I lost track as I moved on in this journey making newer friends.

I want them all to know that even though time and circumstances may have drifted us apart from each other, yet I treasure each of the friendship close to my heart.

To God for giving me the most precious gift. My Namnam. My family and most of my friends know how much I yearned to be a mother. I remember spending many a nights crying my heart out for not being able to conceive. There were days when I’d pray endlessly for that one signal from Him that would quash all sorts of unpleasant doubts creeping into my mind.

And then after much yearnings and prayers Namnam came into our lives as the most precious gift from God.

5. Most cherished possession till date

It’s a wrist-watch gifted by my father when I passed my 10th class board exam which was way back in 1992. And it has been with me ever since.

6. A special moment that brings a smile to my face

Now that’s a tough one! Only recently I was going through some of the old snaps of Namnam and I realized each one of them made me smile. So let me share one of them with you.

This was taken in when Namnam had just turned one. She was at a stage where she had begun to identify her body parts. We had taken a whole sequence of pictures where she identified her ears, teeth, eyes,etc. 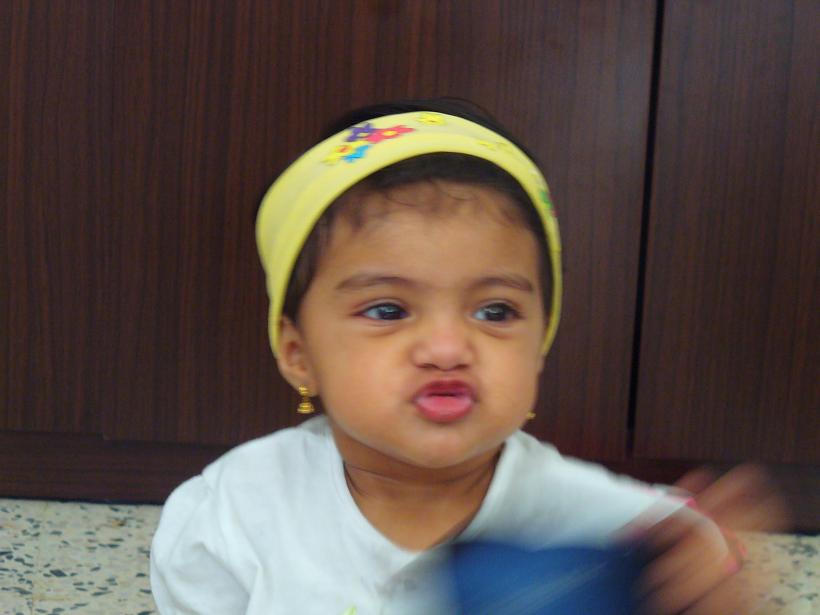 Did that make you smile too?? 🙂

I’m leaving this tag open to anyone who would like to take it up. In case you do pick it up, please share a link too 🙂 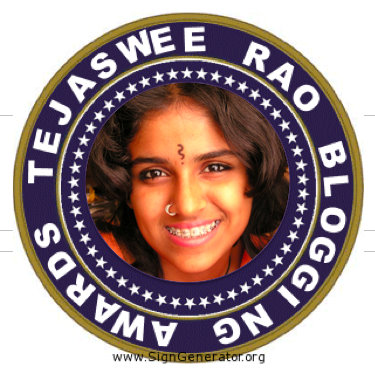